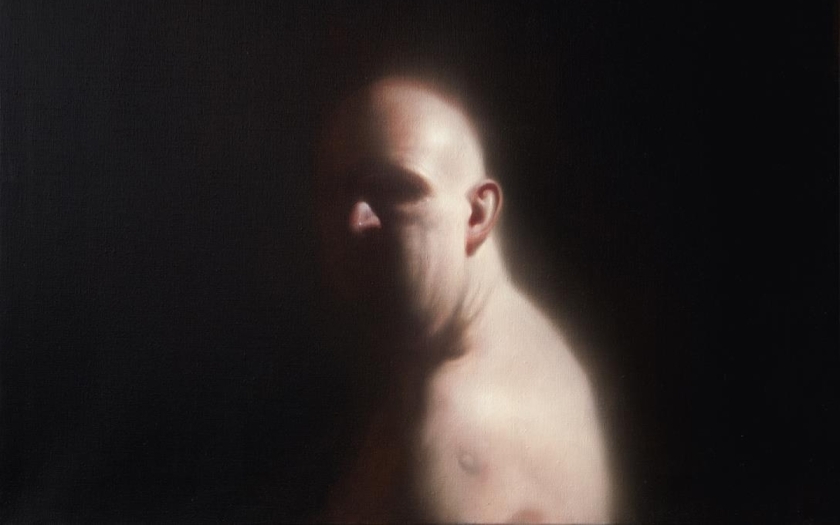 The word ‘stranger’ always implies a somehow dark, shady and yet mystifying connotation. In this regard, I caught myself wondering about the underlying conception of artist and œuvre in ‘Stranger – An exhibition of self-portraits’, which is currently on display at Flowers Gallery on Kingsland Road.

Well, the key here is not to bother with the effect of the art piece on the audience, but to behold the intimate conversation between artist and canvas. Ever since, the art of self-portraiture has been perceived both as a medium of artistic self-exploration as well as a method to unveil and grasp the “true” persona of the yet anonymous artist. Regardless of educational, provocative or illusionary approaches to the subject, the self-portrayal can only capture a limited segment of a person’s life with all its emotions, experiences and mysteries. Thus, the artist’s observation of his “painted doppelgänger” might feel like the daily look into the mirror or scrutinizing an old photograph: Sometimes you discover a part of yourself that has been long forgotten or you are not able to recognize yourself at all and stare into the eyes of a stranger. 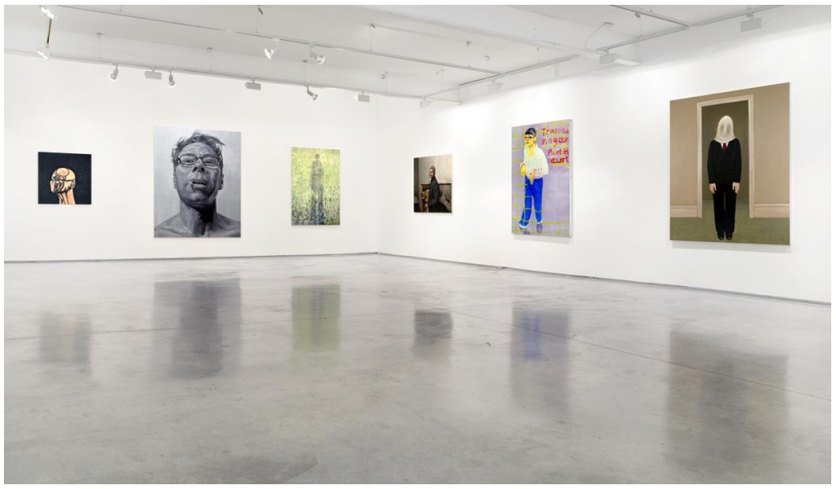 The exhibited works at Flowers Gallery, including pieces of Maggi Hambling, Ken Currie, Peter Howson or Julian Opie, essentially draw on the classical approach of self-portraiture, yet experimenting to some extent with their own vision of reinvention. The result is a multifaceted composition of self-portraits that each bears its unique hallmark. For me, the most exciting pieces are those, in which the artist does not unveil himself entirely to the audience, but chooses the elusive, hidden or inaccessible trails leading to his own persona, emotions and thoughts. It’s therefore no wonder that Tim Lewis’ quirky and playful approach to the subject struck my eye right away. 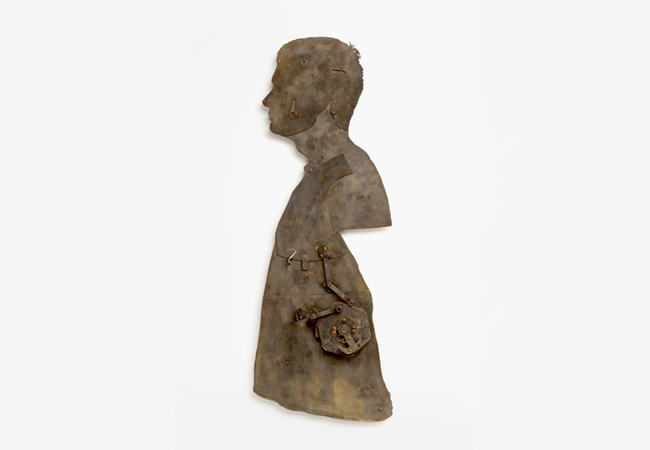 After mesmerizing the audience with his solo exhibitions ‘Machine’ (2011) and ‘Mechanics’ (2012) at the Flowers Galleries in New York and London, two of Lewis’ self-portraits were selected for Stranger. His work ‘T2013’ greatly illustrates his analytic and scientific take on his art objects as well as the unique set of skills and techniques. Known for his automated sculptures that meticulously explore the relation between mankind and the manufactured world surrounding us, the British artist produced a vaguely outlined artificial-self, made of brass and stimulated by an electronic motor. In this respect, Lewis literally took his own reinvention to heart: The tricky mechanism sets head and torso into motion, enacts a breathing movement and eventually transforms the enigmatic, anonymous human shell into a living organism. 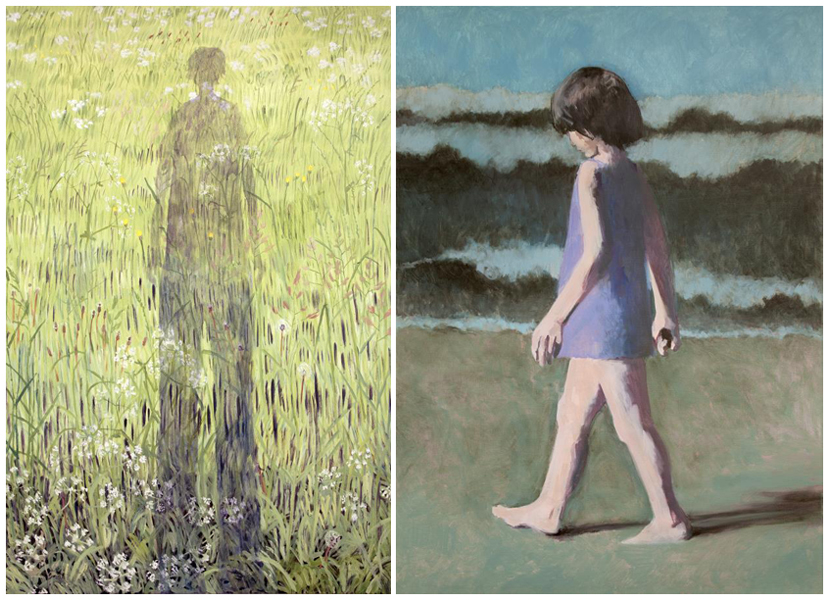 The enchanting ‘Shadow 2013’ is a rather unusual composition of Jiro Osuga’s repertoire. Instead of pursuing a humorous and exuberant imagery, the Japanese artist depicts himself as a shaded apparition within a field of lush grass and blooming flowers. Osuga’s minimalistic approach to the subject stands in stark contrast to his other exhibit, ‘The Multitude 2013’ (click here), in which his gazing ever-present face exposes the many facets of everyday life and his own self. In Shadow 2013 however, Osuga’s doppelgänger escapes the judging eye of the observer entirely, unwilling to reveal himself and choosing to hide in anonymity.
One artwork that marches to a different tune is Claerwen James’s impressive ‘Self portrait when young 2013’, which depicts herself in her early childhood rather than in her current living situation. Essentially, the award-winning painter draws her inspiration for all of her portraits from photographs, which she scavenged or taken herself. The setting of her self-portrait elegantly hints to a recurring subject that revolves around multiple works of this group exhibition: The artist’s relation to his or her persona in past, present and future. Unwittingly turning away from the camera focus, the young Claerwen progresses on her stroll along the beach as the shifting tides announce the inevitability of the future and the constant changes of life.

It is beyond doubt that figurative painter Ken Currie coaxed me to dwell upon his two pieces for the longest time of my visit at Flowers Gallery. I’d say it was a brief eternity. Labelled as one of the ‘New Glasgow Boys’, his works are mainly concerned with the human body and its confrontation with illness, ageing, injury and death. The hauntingly dark and brooding double self-portrait ‘Study (Self portrait with self portrait)’ depicts the artist and the unfinished image of an aged man, who – at first glance – resembles Currie. In truth, the portrayed is his deceased father, whose death has already been the subject in his earlier painting ‘Unfamiliar reflection’. Despite choosing a wholly different motive, the significance in his work coincides with Claerwen James’s self-portrait: Currie’s protagonists speak of the fate of ageing, accepting the finitude of life and the trials that await us.
To be honest, the mystifying and eerie ‘Self Portrait, December 2012’ kind of creeped me out at first. Indeed, Currie delivers a truly wonderful work of shadow and light, but I can’t get rid of the feeling that the half-lit, half-shrouded man seems to stare directly into the observer’s soul. Well, it definitely serves its purpose, as it succeeds to engage the audience and provoke thought. At least it works with those, who dare to give it a go. In my perception, Currie tries to illustrate the true nature of human life – characteristics, feelings and experiences that we gladly share with others and those we rather want to conceal in darkness. Most definitely, there’s a stranger within all of us.