At heart, everything we do in life is in a way a form of improvisation. Not knowing what will happen next, we approach certain actions in rather spontaneous, intuitive ways that determine the roles we play in society. Alas, this free thought and behaviour is, as we all know, too often regulated by a growing cluster of rules and conventions – even so in creative fields. Departing from the precast, arranged and stiff concepts that subliminally mark today’s music-making and live performing, the wonderful ‘i = u festival’ (12th – 21st September) dared to celebrate the inspiring dialogue of musical improvisation with dance, art, theatre and film in all its glorious diversity:

‘The idea behind i = u is simple: to present a series of events that emphasize a balanced interaction between performers, and also, between performers and audience members. The series is founded on an ideal of equality between us, where we actually aim to listen to one another.’

As a non-profit venture, the festival is per se a great showcase for project improvisation: Curated by musicians and composers Eugene Feygelson, Michael Dylan Ferrara and Noam Faingold, i = u was realised through crowd-funding, private sponsors, as well as the collaboration with artist Yinka Shonibare, who provided a stage for performances, open rehearsals and workshops at his gallery space ‘Guest Projects’ just off Broadway Market. Precisely because the events were not following strict concepts and schedules, but generated a laid-back, communicative atmosphere, the festival was equally a success for performers, organizers, volunteers and audiences. Well, speaking of volunteers: I can consider myself very lucky to have been a small piece of the bigger picture and to have met a great bunch of amazing, dedicated and amiable people. Hands down.

Among the myriad of memorable i = u impressions, sentimentalities aside, two terrific yet utterly different performances amazed me on the opening night. Pianist (and linguistic talent) Bobby Mitchell ignited the festival-spirit with his initiative ‘Kickstart the classical’, exploring and reinterpreting pieces by Schumann, Chopin and Brahms. Witty, charming and always with a smile on his face, he quickly won his audience over and proved why performance does not have to be necessarily based on repertoire.
To be fair, I only had a vague idea of Cosmo Sheldrake’s passion for sound experimentation, but he literally turned the place upside down. “Armed” with keyboard, drum machine, loop station and microphone, the multi-instrumentalist weaved a delicate net of sound that assembled disparate musical traditions – from Mongolia to West Africa, blues to classical and folk to Balkan brass. It eventually didn’t take long to tear the keen audience from their seats and a joyously dancing, clapping, whistling and echoing group of enthusiasts turned into an integral part of the show. Wicked!

Just as nightfall set in on day #3 of i = u, more and more curious eyes peered through the windows of Guest Projects to catch a glimpse of a unique audio-visual symbiosis: Australian pianist and composer Rae Howell (aka. ’Sunwrae’) in collaboration with experimental painter Carolina Maggio. Tirelessly switching between accompanying, rushing, accentuating and drifting passages, the duo embarked on the search for a connecting point between mellow piano tones and flowing water colours.
This alternating game of questions and answers, the listening, observing and studying of one’s partner’s work, while cautiously conducting and retracting, was impressively kept up by Junior Laniyan, one of the capital’s most talented tap-dancers and founder of the London Tap Jam. Encountering the driving piano play of Sunwrae with complex rhythms, it felt as if he wanted to dance his heart out and set his small, wooden stage ablaze. In a meeting by chance, the creators of the festival teamed Junior up with violinist Max Baillie for a short improvised encore. Plucking and tapping, the duo interacted with the greatest of ease, as if they’d known each other for all eternity. 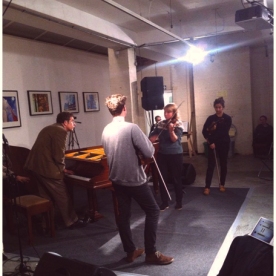 Well, I can definitely consider myself a music enthusiast, but in terms of music education, I am a dark horse – never taking up an instrument as a kid is something I really regret. Tuesday’s classical improvisation workshop with David Dolan, founder and director of the ‘Centre for creative performance and classical improvisation’ at Guildhall School of Music and Drama, was thus something very special for me: Accentuated by witty anecdotes about teaching and improvisation theory, he invited his audience to bring their own instruments on stage and get involved in brief sessions of musical experimentation. On his search for ‘trouble’ (his term for improvised interaction), Dolan sought to explore his counterparts’ approach to musical repertoire, spontaneity and instinctive performing within a warm and informal atmosphere – no scholarly rules and certainly nobody who cared about mistakes. After a series of intriguing discussions, shared experiences and improvised collaborations with former Guildhall students, it was high time for the night’s final show: David Dolan and the ever-present Bobby Mitchell in full swing with violinist Fra Rustumji and Simon Gilliver on flute. Truly beautiful!

Last but not least – the closing night of i = u. One final chance to savour and celebrate the beauty of classical music beneath the roof of Guest Projects. Besides Quest Ensemble’s wonderful collaborative compositions and bittersweet symphonies, it has been the remarkable 12 ensemble that impressed me most. Their performance of Arvo Pärt’s ‘Cantus in Memoriam Benjamin Britten’ and Britten’s own arrangement of Purcell’s ‘Chacony in G minor’ was moving, brilliantly orchestrated and (to me) the perfect unofficial conclusion of the festival. Oh, but wait a minute. The team of chief-improvisers Eugene, Michael and Noam had the plan to bring the night to a close in style: Loaded with drinks, music and joyous people, a private party boat slowly chugged down the dark waterways of Regent’s canal. Ahoi!

If you’d like to support the cause & i = u 2014, you can find more information on: http://www.iequalsufestival.com