A web of eclectic visual storytelling, knitting threads of mythology and classic literary tales, delving into the abyss of the human psyche with a surrealist verve that raises far more questions than it answers. Simply put, Tim Lane’s impressive portfolio effortlessly ticks all the boxes for me. He first caught my attention when nomadic Antlers Gallery – the lovely Bristolians who represent Tim – set out for collaborative exhibition ‘Kindred’ with London’s emerging Curious Duke Gallery in 2013. Since then, the Cheltenham-born illustrator and painter released his highly ambitious, crowd-funded mammoth project ‘Anima Mundi – Soul of the World’, a 5-metre concertina book of graphite drawings that took two whole years to complete. Similar to his earlier works, his large-scale visceral illustration plays with recurring themes such as love and death, renewal and sexuality as well as the animalization of the human being, which yet unfolds an enigmatic open-ended narrative. And when I got the chance for a short Q&A with Tim, I eagerly jumped at it and asked him about his all-time favorite authors, the significance of mythology, his visual narrative style and the genesis of ‘Anima Mundi’. There you go!

Hello Tim. How’s things? Can you give us an idea what you’re working on at the moment? Hello, all good thanks! I’m currently working on a drawing commission for a collector based on an offshoot of the Arthurian legend ‘Gawain and The Green Knight’. I also have a gallery curator that is keen for me to do some site specific, large scale drawings in response to a museum exhibition about Death. This is all in the pipeline this year and of course I’m always working on drawings for my own pleasure too. Important to have both I feel…

In your bio you describe yourself as ‘naturally gravitating toward the fine art market’ since leaving university and ‘preferring the greater creative freedom’. In what way did your time at art school inhibit or tame your development as an artist? It wasn’t that art school – Falmouth School of Art – necessarily inhibited my development, it’s was because I chose to do illustration, which was great on many levels especially as it prioritized drawing – which suited me – but it is an intrinsically ‘commercial’ discipline. So especially when you have to engage in the real world market you are told what to draw by the client or your original response to the brief is creatively compromised. I don’t like being told what to do creatively, it takes away the pleasure of producing work for me. So I went towards the fine art market, which allowed me to have more self-expression in an ‘illustrative’ style. If the work sells, that is important, but this is not the reason for creating the work in the first place for me!

One of the things that instantly struck me about your work is your incredible visual storytelling. Did you ever think about putting your thoughts into words instead of letting them slip in your artworks? I think you have put it really well there, I would love to be good at creative writing, I have tried, but I do find that I “slip” into artwork! I just start over-explaining things to death and think to myself “why don’t you just draw/paint this scene that you’re so tortuously trying to explain in words?!” Drawing is my preferred medium for self-expression. It’s just the most satisfying way of telling a story.

Many of your works delve into mythological themes such as the interplay of love and death, desire and sorrow. What’s so fascinating about it and has this always been the case with reference to your art? Yes I have always loved mythology! It is such a visually dramatic, darkly imaginative, animalistic, visceral way of seeing and understanding the world and our place in it. Myth is such an amazing pool of inspiration as it deals with the perennial human condition, so it is always changing but remains relevant and philosophical in its approach. The dualism: the lightness and darkness, life/death growth/decay in constant opposition, swirling around is just how it is! So it just comes out in the artwork. 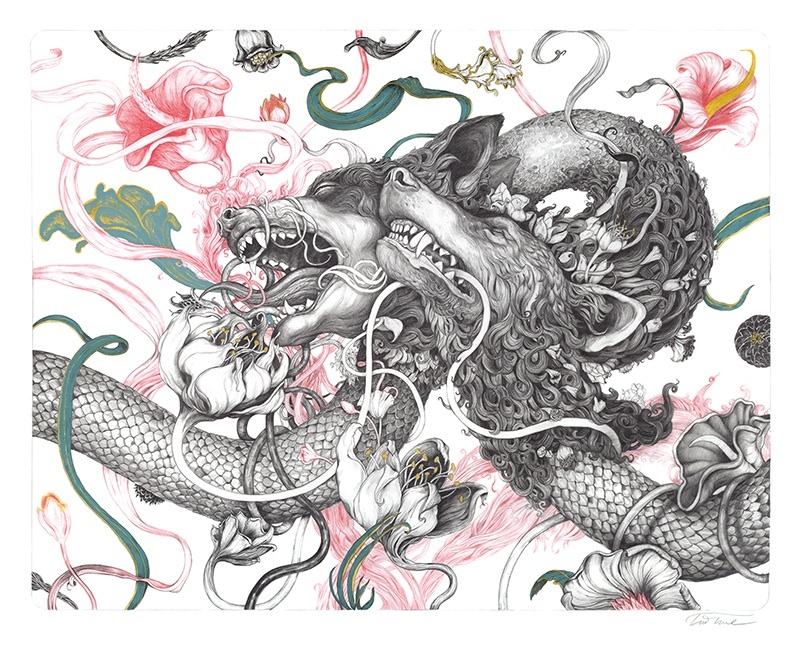 Do you fuse personal experiences and ideas with these recurring elements of classical tales? Yes definitely, that is just how it naturally works too. In my artists’ bookwork ‘Anima Mundi’ (‘Soul of the World’) this was especially so, it was a sort of wordless/visual poem/diary of my personal life and my own philosophy based on reading about creation myths and meditating on the cyclical nature of life and death. The idea of being part of this ‘world soul/energy’ and a ‘collective consciousness’ and that everything is linked is an incredibly productive idea, both creatively and psychologically I believe. And the eternal ideas found in world myth only serve to reinforce this.

How does an artwork usually come to life? Is there a certain routine you pursue from the initial idea to the finished art piece or does it just flow organically? I usually start by reading, letting creativity flow in response to an emotional trigger from a narrative/ myth/ story, letting the ideas and imagery percolate down through my subconscious. Then when I sit in front of a blank piece of paper I see what comes out. I do favour this organic way of working as it allows the subconscious to be realised, which is where all the best and most unexpected ideas come from.

Exchange of Ideas in the Underworld © Tim Lane

As your work is influenced by aspects of classical literature: Who are your all-time favourite authors? And which stories would you love to take as an influence/inspiration in future works? I love Classical works by authors like Homer, especially ‘The Odyssey’, Virgil‘s ‘The Aeneid’ and Ovid‘s ‘Metamorphoses’. All epic and poetic, which influence later writers like Dante‘s ‘Inferno (The Divine Comedy)’. But I just find anything on myth, folklore and the occult interesting, anything filtered through an intelligent mind with a dark and poetic sensibility.

Are there any authors from the late 20th or early 21st century that you admire? Yeah, I love the magic realism of Mikhil Bulgakov’s ‘Master and Margarita’, William Golding’s ‘Lord of the Flies’, loads of short stories by Edgar Allen Poe, H. P. Lovecraft, Hunter. S. Thompson, Carl Jung, Angela Carter and many more. Roberto Calasso‘s ‘The Marriage of Cadmus and Harmony’ (about Greek Myth) and ‘Ka’ (about Hindu Myth) are probably two of my favourite modern books about mythology ever.

Your epic ‘Anima Mundi’ is loosely based on the surrealist story ‘The Gondolier’ by Nicholas Patnaude. Would you love to switch roles & see one of your works being used for a story at some point? Actually ‘The Gondolier‘ was the working title of my own story and initial idea concerning a Venetian gondolier in the modern day that was sucked down to hell to become the new ‘Charon’, ferrymen over the river of Styx in the underworld. I had just provided artwork for the front cover of Nicholas Patnaude‘s surreal horror novella: ‘First Aide Medicine’. So I asked him to look at my initial plan and continue it – which he did and did a great job – but I ended up abandoning it to just have full creative freedom. That eventually turned into something completely different which I ended up calling Anima Mundi. So it was all a very necessary part of the two year process but what it finished up being was completely different from the genesis. And yes! I would love to see one of my works responded to in another artistic medium, written or otherwise.

What does 2015 hold for you after such a mammoth project like ‘Anima Mundi? Well, I definitely want to do something similar again, but I used up such a lot of ideas and evidence of life experience in that book, it was kind of a therapeutic diary. So I’m just slowly letting the next one happen when it’s ready. It is sure to be marinating in my sub-conscious as we speak, but its not the time yet… until then.

Thanks very much for your time, Tim. All the best for the future!